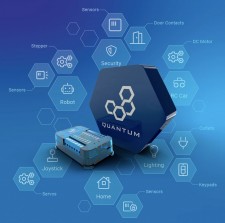 Makers can create custom apps and firmware without coding through a simple graphic UI and control any wireless device through a central server within the Quantum IoT Platform.

SANTA BARBARA, Calif., June 25, 2020 (Newswire.com) - ​​​​​​​​​​​​​​Frustrated with Arduino’s limitations and a desire to wirelessly automate devices in the home, Michael Barnick, 58, founded Quantum Integration to bring a new level of integration and IoT to home automation enthusiasts. With his background in computer engineering, including management at Apple Computer, and as an experienced tech startup entrepreneur, he decided to change the industry and finally making it easy for electronics hobbyists to make and manage their very own IoT networks.

“Single-use IoT devices like ‘Nest’ are no longer enough for those wanting more control. The Quantum IoT platform is unique in that it allows easy integration of any number and type of device. It’s plug-and-play from beginning to end and designed for novices and experts alike," said Mr. Barnick. “It is now easier than ever to build custom automation projects from using remote temperature sensors, lighting control, security systems, entire high-end home automation, and even robots. The only limit is your imagination!”

Quantum Integration is a California-based corporation founded in 2017, specializing in IoT platforms and devices. Their products include servers, wireless IoT devices and their own proprietary operating system.

They also offer a Starter Bundle that includes a Q-Server and two Builder Bases for only $249, which provides a complete IoT platform, enabling anyone to build sophisticated and purposeful projects.

Hardware products will be available for a discounted purchase price on Kickstarter, starting mid-July 2020, and will later be available from online resellers or directly at quantumintegrate.com, beginning mid-August 2020.

Quantum Integration delivers a user-friendly IoT platform that empowers electronics enthusiasts and hobbyists to build high tech projects from a simple button to home automation and robots. Leveraging the combination of multiple Q-Client Builder Bases, Q-Servers and a straightforward developer environment, users can write apps and create custom firmware without coding. Quantum Integration provides a superior experience in the home. The company’s platform eliminates the barriers prohibiting adoption of home automation, making it the new standard for convenience. The key to accomplishing this is the company’s unique platform designed specifically for a wide range of low-cost Bluetooth devices. Quantum Integration also provides a graphic based development environment that allows fast and easy control of any custom device. Along with a smart plug-and-play feature, users can add and use devices on the network in a matter of seconds, at a price point and scalability unmatched by any of the competitions in the sphere.